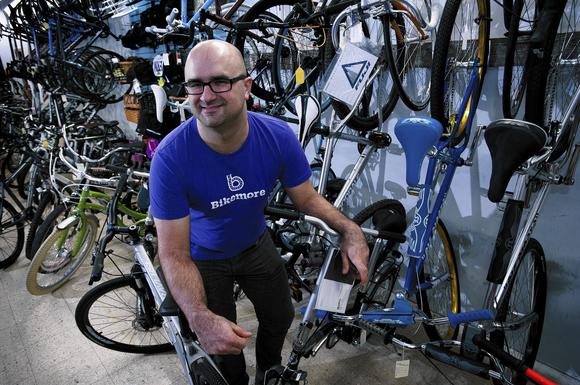 For 23 years, Penny Troutner has owned Light Street Cycles in Federal Hill. And she had seen bicycles on Baltimore’s streets, for recreation and transportation, even before she opened her bike shop. But Troutner holds up 2011 as the year she noticed drivers giving cyclists in the city more room on the road.

“After that I noticed I would come to an intersection and cars would stop, and wait for me or wave me by,” said Troutner.

But infrastructure improvements have also contributed to safer streets for cyclists. Since 2006, 140 miles of cycling lanes on city streets have been installed, a measure that garnered Baltimore recognition from the national League of American Bicyclists as a bicycle-friendly community.

And according to some inside the city’s Department of Transportation, the increase in overall bike-lane mileage is just the tip of the iceberg. This spring, the city is looking to roll out a number of far-reaching cycling measures. Among them: Charm City Bikeshare, a bike-sharing program with 25 stations and 250 bikes in Southeast, South and Downtown Baltimore to start, and run by the same company that operates Washington, D.C.’s, Capital Bikeshare and New York City’s CitiBike.

“We’re going to see a visible difference in the next two to three years of bike infrastructure in the city,” said Billy Hwang, 40, the deputy director for administration at the city’s Department of Transportation.

Hwang said this year marks the first time Baltimore is “dedicating federal and local funds to bicycling,” a total of about $3.1 million to put toward bike infrastructure, including another 500 bike racks that will be placed citywide over the next year.

For several years, city government has hinted at implementing a more comprehensive cycling policy. As Baltimore plays catch-up to other metropolises that have bet big on bicycling, a coalition of boosters and everyday riders has also cropped up, pushing one message: Build up Baltimore’s bike infrastructure, and the cyclists will come. Now the convergence of several forces has made 2014, it seems, the year biking in Baltimore will take a great leap forward.

Nowhere has that call for better infrastructure been stronger over the past year than inside Bikemore, a cycling advocacy group founded in 2012. About 150 members contribute monthly dues to the nonprofit and work to promote biking awareness and safety by petitioning the city’s DOT and holding events, including regular bike commuter workshops with state advocacy group Bike Maryland.

Cofounder and executive director Chris Merriam can deliver the reason for Bikemore’s existence in a sentence: “Civilized urban cycling is a real transportation alternative for a lot of people in today’s cities.” You need not be aTour de France champion to ditch your car and commute by bike all over town, as Merriam, 31, has been doing for six years.

“I got my bike out of the basement and just started,” he said. “At first I was scared as hell because I hadn’t been taught how to drive in the street.”

But Merriam, who has a master’s degree in urban planning from Morgan State University, thinks the problem goes a bit deeper than getting used to the roads, especially when the roads are how cyclists have to get around. He insists that “we’ve engineered biking and walking out of existence” in the U.S. In Baltimore, it’s a difficulty exacerbated by the city’s disconnected bike infrastructure.

Accommodations for cyclists do exist — a north-to-south bike lane on St. Paul Street, bike lanes in and around the Inner Harbor and Southeast Baltimore — but a lack of connecting east-to-west lanes, for instance, makes the overall system disjointed. This makes commuter cycling tricky for bikers who live in northern neighborhoods, as Merriam does, who would take advantage of protected bike routes to travel throughout the city.

A Catch-22 also exists here, as it does in many other cities around the country now working on expanding cycling networks.

The Baltimore Bike Party certainly makes a convincing case. Begun in April 2012, it’s a meeting of all stripes of bikers the last Friday of every month. At its peak in the fall, Barnett said, around 1,500 cyclists can be spotted riding designated routes around the city.

While the bike party isn’t directly advocating for better cycling infrastructure the way Bikemore is, it has raised the profile of cyclists in Baltimore. Merriam calls the

monthly rides the “face of biking in this city.” Last summer, Mayor Stephanie Rawlings-Blake even joined in for two bike party rides.

Of course, Bikemore believes that cyclists have arrived, which prompted the group to send a letter in early 2013 to Baltimore’s Department of Transportation outlining their requests for 2014. Among them were traffic-separated bike lanes on Maryland Avenue and Cathedral Street; completion of the Jones Falls Trail; more bike racks; and the launch of Baltimore’s bikeshare system.

In October, Bikemore got its answer: Yes.

“It was a combination of good leadership at DOT and good advocacy on our part,” said Merriam, who counts Hwang as an ally of the cycling community. “We made clear what we wanted — we have a long list of projects that we want to see completed. A lot of that was stuff that was proposed by Nate Evans.”

Indeed many of Bikemore’s demands were already suggested by Evans, who was hired as Baltimore’s first bike and pedestrian planner in 2008 and stepped down from the job in November. And much of what former bike czar Evans proposed was already included in the city’s Bicycle Master Plan, drafted two years before Evans even arrived at the Department of Transportation.

“The letter from Bikemore just reiterated a lot of things I was working on, but showed there was another group out there that was going to hold the city accountability for what was being done,” said Evans, 41, who now works as an engineering consultant to the State Highway Administration on its bicycle retrofit program.

When Evans began his tenure, there were 20 miles of bike lanes and two bike shops in the city. Now there are 181 miles of lanes and six bike shops. Baltimore’s Department of Transportation set up almost 500 bike racks during that same period, he says. In fall 2008, Evans conducted Baltimore’s first informal bike census. In September 2013, just over 3,000 cyclists were counted at four citywide locations, a number that seems paltry in a city of 620,000, but represents a 65 percent increase in commuter cycling compared with 2010, according to Caitlin Doolin, the city’s new bike and pedestrian coordinator hired in October.

A 27-year-old former high school triathlete, Doolin is a natural fit for the job. Like Evans, she has a background in engineering and planning. Like Bikemore’s Merriam, she gets around the city primarily by bike. Like Hwang, she’s pushing the Baltimore Department of Transportation to focus less on designing streets for cars, and more on tidily wrapping the traffic infrastructure in with the city’s other transit options, including Charm City Bikeshare.

Both Hwang and Doolin are confident bikesharing will launch this year as expected. The city has the money, Hwang said, to buy the stations and the bikes. Now the city is working with Alta, the company that manages the station software and makes money off bikeshare memberships, to secure sponsorships from local businesses to ensure long-term viability. (There’s a reason New York City’s bikes bear CitiBank’s branding.)

Other improvements, including ones in Bikemore’s 2013 letter, will take several more years to implement, said Doolin. A Downtown Bicycle Network with $1.2 million in funding from Maryland’s Transportation Alternatives program is in the works to connect the city’s northern neighborhoods to existing bike lanes scattered around the Inner Harbor, Fells Point and Mount Vernon — complete with a three-mile, two-lane cycletrack running the length of Maryland Avenue and Cathedral Street and east-to-west connecting lanes on Preston, Biddle, Monument and Madison streets.

“Baltimore’s tricky because there are so few broad streets. Most bike lanes in Baltimore are too close both to traffic and to parked cars for my comfort,” said Jared Nipper, a 33-year-old Remington resident who rides in the Baltimore Bike Party.

A 2014 update to the Baltimore Bicycle Master Plan, which Doolin said is now being vetted by the city’s planning department and Bikemore, includes this ambitious number: 8 percent. That’s the percentage of bike commuters Baltimore’s DOT wants to see on its streets by 2028, said Doolin.

In Portland, that stereotypical hipster haven and bearded bicyclist paradise, 6.1 percent of residents commute by bike now, according to latest numbers from the League of American Bicyclists. In Baltimore, just 0.8 percent of people commute by bike, Hwang said.

“This [bicycle master plan] is the ideal vision,” Doolin said. “We want the stars.”

It’s one thing, however, to install additional bike lanes. It’s another entirely to remake Baltimore when it comes to bike infrastructure.

“I definitely left a lot of work undone,” said Evans, who saw his role as bike and pedestrian planner for Baltimore as something of an ideal job. “I could also see that what I was doing was I was going to reach the end of what was going to be the low-hanging fruit. Anything I was going to try to promote after that was really going to be a harder push.”

Cycling advocates, despite what they’ve managed to achieve thus far working with Baltimore city government, worry that the major efforts they have been pushing for that are now on the cusp of being realized might fizzle if they don’t happen soon.

“It certainly helps when a lane goes in. It reminds people they can do it. It helps when there’s bike racks. It makes cyclists feel welcome,” said Troutner. “But our city is still very, very, very far behind most other cities.”

Biking has had the support of at least one City Council member in the past. District 14 Councilwoman Mary Pat Clarke introduced a set of biking bills in 2009 that were either enacted into law or passed as resolutions, including
a cyclists’ Bill of Rights and a “Complete Streets” policy to ensure that road resurfacing is done with cyclists in mind.

And then there’s Charm City Bikeshare, the program that would be the recognizable imprimatur for yet another American city trying to position itself as bicycle-friendly.

Successful bikeshare systems, Evans said, stick around “because a mayor wants it.” For evidence, see former New York City Mayor Michael Bloomberg, who saw that the city install more than 350 miles of cycling lanes in preparation for the launch of CitiBike in 2013.

Rawlings-Blake has publicly lent her voice to supporting biking in the city. Speaking at a transit event in Federal Hill last April, she said the city is “committed to installing bike lanes” and that “the cycling culture of Baltimore is now booming,” just before making a plug for the hopeful spring 2014 launch of bikesharing.

“As my administration looks to grow the city of Baltimore by 10,000 families, we plan to invest more in public transit options — including adding more resources to improve cycling infrastructure to support the city’s upcoming Bikeshare system,” said Rawlings-Blake in a statement released to b.  “We want to create a world-class, innovative transportation system that will provide public transit options to help mitigate traffic and improve the air quality. I am truly excited about Charm City Bikeshare and look forward to the enhancements it will make to the quality of living for those who live and work in Baltimore City.”

Doolin points out that Charm City Bikeshare, as well as the improvements to Baltimore’s bike infrastructure, are just the beginning.

“We’re looking at phase one here,” said Doolin. “We want people to walk out their door and have three to four transportation options to take that are reliable.”

Merriam and Bikemore feel confident that biking as transportation, and not only recreation, will continue to be embraced in Baltimore.

“It’s not for everybody,” he admits. “But I think it’s an idea whose time has come.”